Six Star Wars Games to Prepare You for The Force Awakens

A long time ago in a galaxy far, far awayâ€¦

TO PREPARE YOU FOR THE FORCE AWAKENS

It's an exciting time for Star Wars

fans all across the galaxy. Although

the movie series seemed to have ended,

the impossible has happened. With the

As everyone races toward the nearest movie theater Here“s a series that has been talked about a bit more recently than the others on account of a reboot recently being released. The 2015 Star Wars: Battlefront, while very pretty, unfortunately ended up disappointing fans. The first two games in the series, however, are still great. Especially Star Wars: Battlefront II, which not only features a better story, but lacks a few of the problems that plagued the original. Hopefully the reboot gets a sequel that can top the original game“s sequel, but until then, the second Battlefront remains the best.

It didn“t seem right to choose just one of the three Super Star Wars games for this list, so I cheated and chose all three. Based on the original trilogy of films, the series began with a title simply called Super Star Wars for what else than the Super Nintendo. Then came Super Star Wars: The Empire Strikes Back, with Super Star Wars: Return of the Jedi following closely behind. It“s a fun trilogy of games with some sweet 16-bit versions of classic Star Wars tunes, so if you at least have a Wii lying around, I recommend picking ”em up on the Virtual Console. If you don“t have one, you can get the first one on PS4 and Vita too.

Following up the fantastic Star Wars: X-Wing, Star Wars: TIE Fighter is not just a better space-combat simulator. It“s probably one of the best space-combat simulators out there. But maybe I“m just saying that because Star Wars. And because you“re on the same side as Darth Vader. Either way, TIE Fighter is still a fantastic game with a lot to love. It“s a bit difficult to find physical copies of the game these days, but thankfully GOG.com has it up in the cloud for download. So, like, go play it. The second entry in one series and the first entry in another, Star Wars Jedi Knight: Dark Forces II is a first-person shooter that does a lot of things right. While the original Dark Forces was what some might consider a Doom game with a Star Wars skin (not a bad thing), Dark Forces II improved greatly upon that idea to create a more fleshed out Star Wars experience. Mainly by giving the protagonist a lightsaber. And Force powers. In the end, those two things are really all you need. 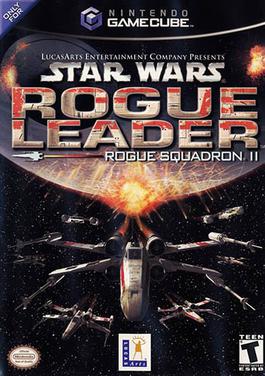 Among all of the launch titles the GameCube had to offer, the best one just so happened to be a Star Wars game. No Jedi mind tricks involved in that statement. Star Wars Rogue Squadron II: Rogue Leader is simply a fantastic game. And not only is it arguably the best GameCube launch title, but it“s also one of the best Star Wars games out there. It looks great, it plays great, and with its inclusion of some of the films“ most memorable moments, Rogue Squadron II is all you really need for your Star Wars air-combat fix. If you can get your hands on a copy of the GameCube disc, that is.

Perhaps the Citizen Kane of Star Wars games and the holy grail of licensed games in general, Star Wars: Knights of the Old Republic was praised heavily when it was released and is praised heavily still. Many would consider KotOR to be the definitive Star Wars game. Me included. The fantastic story with an incredible twist, the characters you enjoy getting to know, the gameplay you won“t get tired of, the innovative RPG elements, a light side/dark side morality system that impacts the story; this isn“t just a great Star Wars game, but a masterpiece of gaming.

On a scale of I - X, how excited are you for Star Wars Episode VII: The Force Awakens? What other Star Wars games would you consider to be among the best?