It has become increasingly more difficult to know what exactly to expect from each new Atelier game. Sure, the easiest guess would be to expect some role-playing game with a heavy emphasis on item crafting at developer Gust's crazy pace of at least one mainline Atelier entry per year. However, be it due significant changes in gameplay systems, or even setting at times, adds plenty of room for confusion on a per game basis for what is generally supposed to be a lighthearted and crafting-centric series that never even brings up the typical RPG notion of saving the world.

To further prove this very point, after nearly a decade of different Atelier trilogies (often categorized as either "Arland", "Dusk", or "Mysterious" by fans), Gust has decided to revisit what was formerly the most beloved 3D trilogy, Arland, by officially making a new fourth main entry by name of Atelier Lulua: The Scion of Arland. Does Atelier Lulua provide just the right combination of ingredients to satiate former fans with a worthwhile follow-up or does Atelier Lulua leave them wondering why they even bothered in the first place? 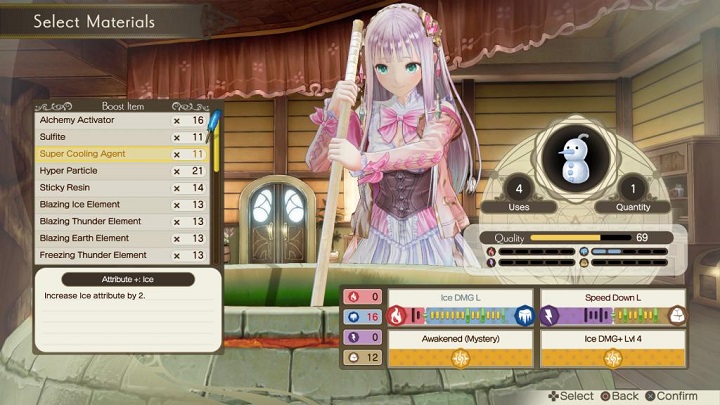 What the title does do fairly quickly, however, is make a good first impression of its new lead heroine Lulua. Lulua herself is  enthusiastic, very willing to help others, and just generally radiates positivity even as she stumbles plenty of times at her newfound alchemy craft. This is added weight not simply because the game takes its time re-introducing familiar Arland faces that fans already know they like, but also because the heroines of the previous game, Lydie & Suelle, were dang near insufferable in how obnoxious they were moment to moment. So, Lulua herself winds up being a breath of fresh air for more reasons than one on sheer charisma.

While Lulua manages to avoid many of the poor mannerisms of the previous game in terms of character, the same level of charisma does not unfortunately carry over into the actual gameplay. For some reason, Atelier Lulua borrows a surprising amount of gameplay systems from the previous "Mysterious" trilogy. Which, despite the "Mysterious" trilogy improving the core crafting system in several ways, many Atelier fans, including myself, would more than argue is not the high point of the series due to many odd steps when it comes to actual gameplay progression, combat, or characters.

Familiar grievances from the previous "Mysterious" trilogy come into play more or less as soon as they introduce "Alchemyriddle" system, or rather a magical journal that attempts to guide Lulua to various alchemy based solutions when needed. Except, just like the previous game's flawed "Ambition's Journal", all of the vital info for both story and alchemy progress is vague, hence, the riddle part of "Alchemyriddle". What this means is that the player can easily flounder around and being unable to progress because one of the alchemyriddle tasks may be as obtuse as to tell you make a specific item, but not the specific trait needed or quality level to mark it as complete. Or perhaps, even worse, alchemyriddle will tell you to gather an ingredient but not tell you where it is or that it's actually a rare drop. To say the alchemyriddle progression structure can be quite annoying at times, especially with some of the optional tasks (but not really), is putting it lightly. 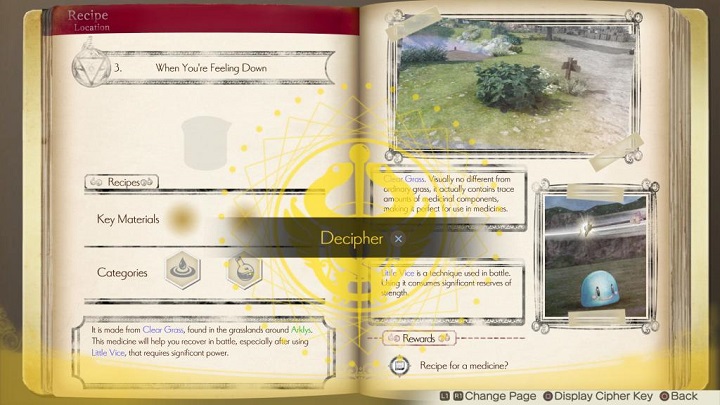 The fundamental issues with the disjointed alchemyriddle progression would be less glaring if Atelier Lulua excelled in different areas such as the combat, alchemy, nostalgic callbacks to the previous games, or dare I say it, even presentation to compensate for it. Alas, Atelier Lulua's never really latches onto any one specialty to be better than the sum or its parts. For instance, the turn-based combat system borrows bits and pieces from recent games, like item based follow-up attacks, and in doing so may very well have made the one with the least amount of change I've seen in a decade or so of playing the series. An eerily similar approach is applied to the crafting system where, while totally functional, lacks any addictive or unique hook to stand out from any of the previous games and can very much feel like one is going through the same motions just with a different heroine behind it.

And because the gameplay is, pun intended, riddled with so many flaws, Atelier Lulua's last resort is more or less to coast on the charm of its characters and Arland setting. As stated before, however, Lulua is a genuinely likable to the point where she is a surprisingly natural fit even as iconic Arland characters like Rorona and Totori are on-screen at the same time. Where these often endearing interactions between her and the cast start to lose a lot of their luster is when the laughable contrived main story starts to go into effect which is roughly halfway through. Basically, without stating it directly, the game focuses heavily on one specific side character that ironically does not earn the narrative weight that is put forth upon them. To make the primary storytelling all the more silly (despite how straight-faced it presents it), the title straight hand waves things like time travel to abruptly resolve the conflict it introduces. 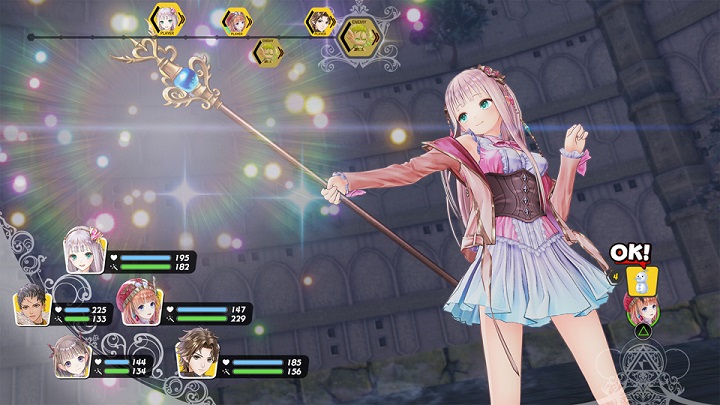 Atelier Lulua: The Scion of Arland frequently feels like a title of mistaken identity. Sure, it has some likable character interactions and returns to the series fan-favorite setting of Arland once more, but nearly all other aspects of it as a game ring hollow. Whether it be borrowing questionable gameplay elements from recent Atelier games (rather than previous Arland ones), such as the frequent progression stopgap that is "alchemyriddle", to a discordant shift in storytelling halfway through that could not be more contrived, it may leave even the most seasoned Atelier fan scratching their head at times wondering who the game intends to please, because it certainly was not me.

- Main story gets laughably contrived right at the end

Atelier Lulua: The Scion of Arland revisits the old fan-favorite Arland setting with likable characters both old and new, but without the solid gameplay structure backbone to hold it up it can easily leave seasoned fans wondering why they even bothered in the first place