By being clearly inspired by numerous rogue-lite and Metroidvania titles, or to use its own preferred nomenclature of 'RogueVania', it can certainly be tempting to write Dead Cells off as just another one of those. However,  Dead Cells is not content with simply paying tribute to iconic titles.

There is an impressive sheen to nearly every facet of its gameplay that not only separates itself from its various contemporaries but also makes it so easy to get lost in the experience, even when it was in an Early Access state last year. After being constantly iterated upon, such as adding new levels, weapons, abilities, and plenty more, Dead Cells is now confident enough to consider itself a full product while also finally letting console owners in on the action as well -- and for great reason. 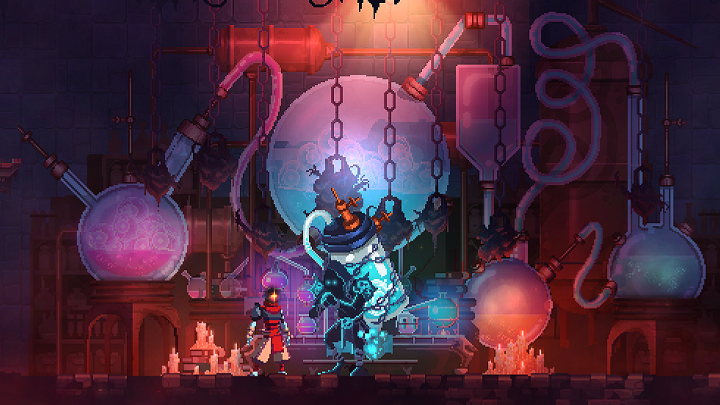 The game quickly drops the player right in, quite literally, as an amorphous green sludge falls from the ceiling and reanimates a fallen humanoid vessel. This eerie landscape becomes one of the closest things to a home, especially after a failed run. Players will soon enough find themselves scrounging whatever tools they can to hopefully overcome their fierce enemy and environmental opposition as they uncover the mysterious depths of Dead Cells' world.

Regardless of its moody world-building and sparse bits of lore (like a certain From Software series), however, Dead Cells absolutely thrives on its stellar combat-focused 2D gameplay above all else.

Whether one is swinging a bulky axe, firing a crossbow, setting up a bear trap, or using hardly subtle nods to other gaming properties (like "Valmont's" whip), the underlying theme is that its huge offensive toolkit has a satisfying power behind it in the right hands. Little details like being able to roll-cancel or shield parry (if it's equipped) out of nearly every animation makes combat feel rather fair too, even though a specific run may not be generous in yielding one's favorite weapons or skills of choice and thus forces them to try out different ones.

To help makes its multitude of weaponry and skills more digestible, Dead Cells divides them into the three in-game stat categories of Brutality, Tactics, and Survival, each of which can be strengthened by obtaining scrolls that are scattered across different levels. Despite the categorization simplification, there is a surprising nuance to each style like when picking 'mutation' passive abilities after completing each level. For example, Brutality can take the most advantage of a mutation that increases damage against an enemy suffering from a status ailment while someone specializing in Survival can regain more life per enemy kill. It is very enjoyable to watch once terrifying bosses/enemies quickly melt due to utilizing a smart synergy of mutations/weapons in addition to getting better and better at the game. 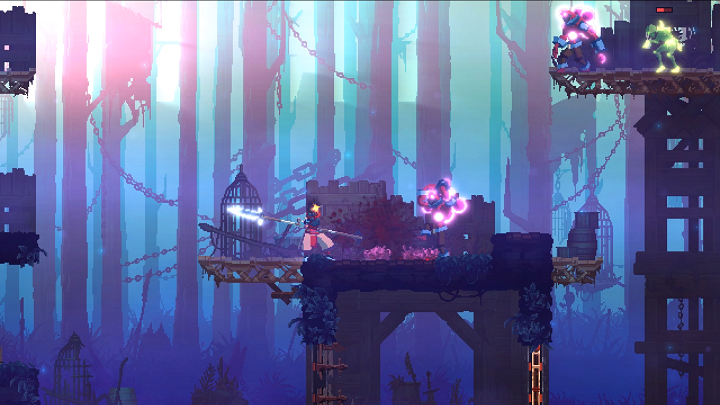 For as thoroughly entertaining as Dead Cells is with its raw combat, the main reason why its addictive gameplay pull is so strong is because of how it wisely borrows and improves upon Rogue Legacy's overall structure.

Rogue Legacy's most welcome contribution to "RogueVanias" was rewarding a player gradually in the form of unlocked blueprints for new abilities or various other conveniences after a failed run. Dead Cells technically does the same thing (while adding many new weapons too), yet the feedback loop is far more consistent by doing so after each completed level. This constant dopamine fix, in spite of the harsh difficulty at many times, also extends to its many branching level paths where thorough exploration can unveil some invaluable permanent upgrades like a quick wall run or a destructive ground pound that opens up the experience that much more.

Amidst such incredibly tight gameplay and level design, Dead Cells' greatest blemish actually resides in its technical performance, which still often holds up rather well. Generally speaking, Dead Cells evokes a 2D sprite art feel with chunky pixels (mainly regarding enemy dismemberment) and smooth animations despite technically being rendered with 3D assets. Unfortunately, its key technical slight on PS4 happens mid-level where there is a brief stutter that seems to outright skip frames of animations before going back to the normally buttery smooth gameplay performance and this happens every few minutes. While I never encountered this problem during the mean boss fights, even after a successful hard mode run, I could see the visual hiccups being distracting enough to cause an untimely demise in more chaotic combat moments, so hopefully it can be cleaned up via patch soon. 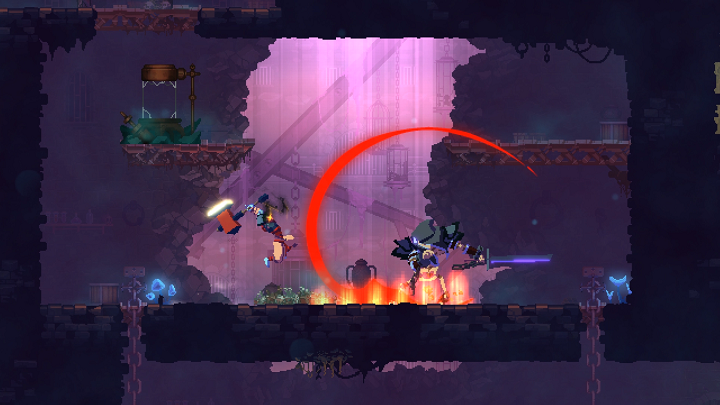 Dead Cells has the uncanny ability of being able to cherry-pick aspects from so many other games and have one be totally fine with it. Because, instead of instilling fatigue, Dead Cells far more often impresses the player by how masterfully realized just about every facet of its core design ends up being. Everything from the skill-based combat that is a total bliss to control, a highly-rewarding structure that accommodates a wealth of different player styles, and plenty of secrets to uncover creates a fiendishly addictive game experience that players will more than struggle to break from the "...just one more run" mentality it so actively encourages.

+ Branching paths, many unlockables, and the improvisational nature easily makes no one playthrough the same

Dead Cells does not shy away from a familiar "RogueVania" template, but rather chooses to do it so well that players will be hard-pressed to justify dividing their time when Dead Cells is that much more satisfying and rewarding to actually play