At this point I have just as much disappointment as I do a bizarre sense of respect for the Senran Kagura series currently. Its first debut, Senran Kagura Burst, felt surprisingly earnest with its storytelling/cast of characters in spite of, well, busty ninjas, exploding clothing, and repetitive gameplay.

But five years is apparently all it takes for the series to lose any and all trace of its former dignity at the cost of improved gameplay. One quick glance at the newest spin-off (or even the title) in the series -- Senran Kagura: Peach Beach Splash -- should silence delusional individuals, like myself, who expect the series to focus on anything more than flagrant fanservice. So, the morality of ladies in bikinis fighting each other with super soakers aside, is it actually any good despite all likely expectations? 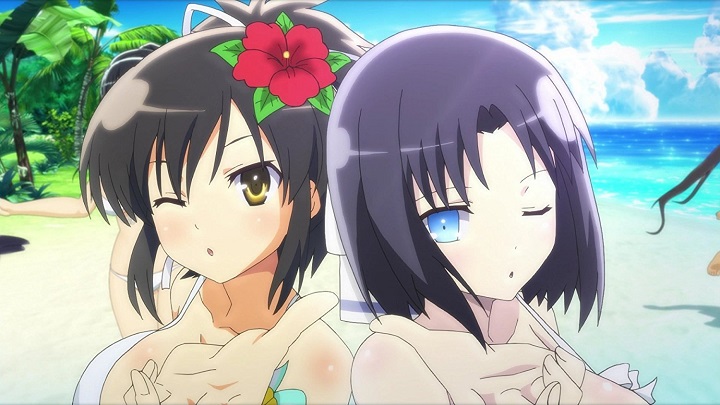 Let just get this out of the way, Senran Kagura: Peach Splash (which I will abbreviate as "PBS" just like the game does from here on) is actually... not a bad game. At least not mechanically.

You just have to sacrifice your pride to play it, if one has not done so already. At its heart PBS is a third person shooter. You mow down the likes of girls flailing pool noodles, fellow ninjas of the different academies (also carrying water guns), and occasionally big boss robots with what should be a woefully-equipped water-fueled arsenal. It won't amaze anyone savvy about third person shooters, as you are more or less encouraged to play it with auto-aim consistently, but it has more enjoyable mechanics than you would expect. The several weapons you can choose each have different alternate fire. All characters also have the ability to jump/float high into the air, or glide across the ground (like in Vanquish), with their water-themed gear as well.

Players can also apply buffs to themselves via various unlockable cards which can be used via the D-Pad mid-combat. Such bonuses also include temporary minions to add support fire or the ability to debuff enemies like (even) worse water conservation or reloading. They do appear in a random order mid-combat, however, so hopefully the player has ones they actually like (so basically not the default setup. Where the difference between a common damage increase card goes from  20% to 60% based on rarity). Players will be regularly getting new card packs, or the money to buy more (to actually get good ones), through both single player and online mutliplayer modes. I guess you could buy numerous skimpy outfits with the in-game currency too, but who really cares about that?

It is just kind of a shame that Peach Beach Splash is structured in a way that feels at odds with what should be fun and fluid combat system. The most glaring of which is a flaw which existed in prior games that is only amplified in PBS, which is the grindy nature before both characters and weapons become combat-ready. For example, you need to feed duplicate cards to power up weapons, increase a character's health, or slightly less importantly for the mid-combat passive abilities. Weapons go from constantly needing to reload and also barely doing any damage to becoming infinitely more effective after several level-ups. Players will rarely find themselves jumping early on (due to poor efficiency) to constantly doing it later on, making the early game obnoxious and clunky to play. The player is also likely to be close to maxing out one weapon after going through the underwhelming story mode. 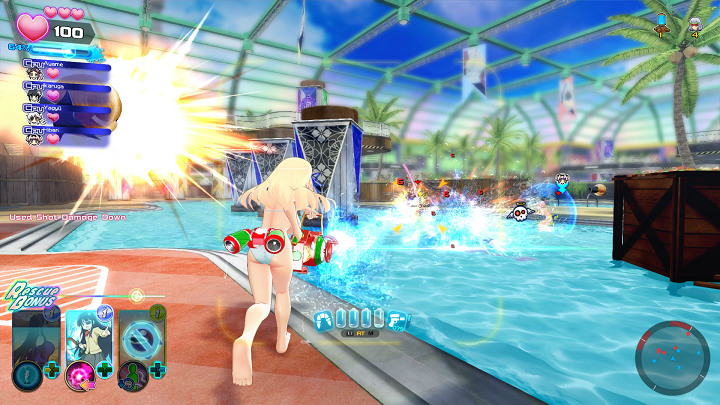 I know I should not have had expectations for it before diving in, but never has Senran Kagura cared so little for its single-player than the main campaign in PBS.

Cutscenes are little more than recycled jokes, and all kinds of perverted innuendo thanks to a certain announcer, though they are thankfully brief and rarely last more than a couple minutes. What is more disappointing is just how little variety there is to it too. Being little more than, extinguishing annoyingly-placed fire spots, and the occasional throwaway boss fight. Speaking of which, the final fight in particular is probably the most unapologetic riff on Splatoon's final fight ever (ironically made worse in its sequel by reappearing yet again) and may have bizarrely offended me more than than anything else in the title.

No wait, I take that previous comment back. As completely optional as it may be, there are incredibly creepy literal groping or spraying discolored fluid mini games to what is basically the in-game dressing room and that is alone pretty much the most tasteless thing in the series' entire history. Like, it even makes the pervy mechanic in which the player literally sprays off an opponents clothing as a finishing move somehow feel more tasteful. Also, as disgusting as it may be for it to be in the game, I can not pretend the signs were not all there upon just booting up the game. Still, one can not pretend that PBS is an expressive game in motion either. Despite being a spin-off it is easily the best-looking game in the series with its colorful visuals and stable. Though, to contrast, the soundtrack does not stand out nearlyas much as its predecessors' catchy scores, such as Senran Kagura Burst, Shinovi Versus, or Estival Versus all proudly had. 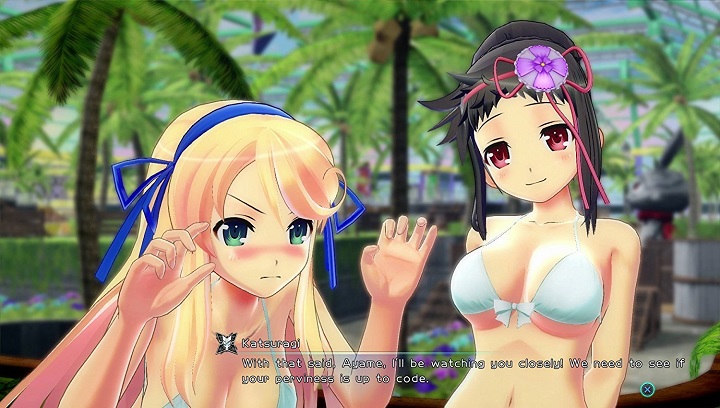 Senran Kagura: Peach Beach Splash is just as exuberant as it is somewhat disappointing that the series has become exactly what it looks: a generally shallow fanservice-y game.

Mechanically, it has the heart of surprising solid third-person gameplay with very fast paced and mobile combat. But it is just as shame that its leveling progression is so restrictive (to the point where players have to reload constantly or barely do any damage) and the only real way to mitigate it is through the entirety of the boring single-player content. Oh, and the perverted mini games that veer far too close creepy than funny as well. Still, players should know exactly what they are getting into with this latest Senran Kagura spin-off. While it is comes across more earnest than it should be in some regards, despite its clear pandering setup, it's a shame that it feels like it's on the cusp of being noteworthy based on its gameplay, but it simply is not.

-  Can feel quite restrictive/grindy with how leveling up weapons is handled (and to be viable online. Co-op or otherwise)

One should know exactly what they are getting into with Senran Kagura: Peach Beach Splash based on a quick glance. While there are certain facets that stand out more than they should, like surprisingly solid gameplay mechanics, it has more than enough annoyances with its progression and single player content to not catch leering eyes on it for very long