Through its hyperactive blend of eccentric 'ultimate' high schoolers, murder mysteries, courtroom confrontations, and narrative mayhem the Danganronpa series has established a dominant visual novel presence. Densely pack all of that to the brim with personality and it is perhaps less surprising that many passionate fans have latched onto Spike Chunsoft's iconic property.

Still, it is crazy to think that Danganronpa's perpetual battle of hope vs despair has not only raged across multiple games, spin-offs, and on different gaming hardware since its original PSP debut back in 2010 but even entirely different mediums such as anime and light novels. With so much material riding on what is believed to be the final installment, does Danganronpa V3: Killing Harmony satisfy hope, despair, or really neither in between for its perceived audience? No matter what one's stance actually is, Danganronpa V3: Killing Harmony ultimately aim towards final truths that are likely to shock all those involved. 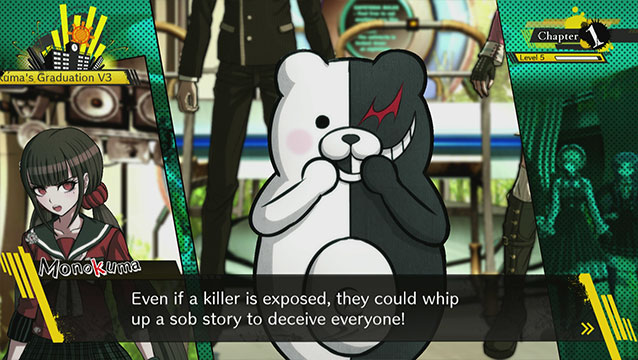 As par for the series' course, the infamous Killing Game has returned once again. Sixteen students are trapped within the confines of a mysterious school and have very little recollection of their pasts. All they really know is that they each have the title of an "Ultimate Delinquent"('Ultimates' generally being individuals with exception talent towards a specific skill)  and are quickly get thrown into battle royale-themed Killing Game via the monochromatic robotic bear named Monokuma if they want to escape. Well... somewhat quickly, in principle.

Danganronpa V3: Killing Harmony has rather inconsistent pacing as an actual visual novel to the point where the game itself self-deprecatingly points out just how slow the intro portions are, and it does not absolve it of such crimes.

It is the longest game in the entire series and the narrative's pacing does not necessarily justify it at times with the agonizing drip feed of important plot details. It certainly picks up later on, especially in the last couple of chapters, but -- in an incredibly morbid way -- players will find themselves looking forward to the next murder setup more frequently than anything else. Thankfully, Killing Harmony more than delivers on that front. 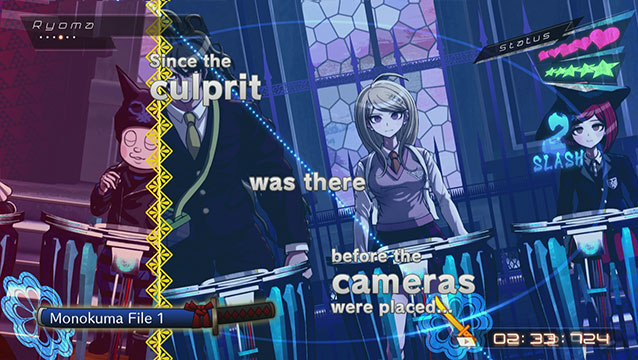 As Danganronpa fans know, the rules are that one cannot simply kill someone else to win the Killing Game. To win, Ultimates need to kill someone else without being caught. And so, this is where the class trials come into play. After a murder occurs, it is up to the would-be survivors to conduct an investigation of the crime scene, and after gathering what evidence they can (...in a limited amount of time), they are then thrown into an Ace Attorney-styled courtroom case to try and pin down the culprit. The reason being that if they don't reach a correct majority vote by the end of the class trial they will all die while the killer gets to return home free (though, in the inverse, if they do nail down the correct culprit then only the killer is punished while everyone survives to see another day.)

The murder mysteries themselves in Killing Harmony are easily the best of the entire series, with perhaps some one or two noteworthy arguments from Danganronpa 2: Goodbye Despair.

As a whole, murder cases feel far more nefarious, calculated, as well as just plain crazy in execution than that of the prior two main games, and it become that much more fascinating to uncover the underlying truth of all of them. This is absolutely vital since class trials themselves consistently last more than a couple hours, so they certainly need to be engaging. Unfortunately, as with previous titles, the mini games within these segments are more or less the worst aspect of the entire series. Some of the new mini games are neat conceptually, like being able to utilize perjury instead of just firing "truth bullets" to prove counterpoints, but most mini games are not that fun despite the context around them. Audible sighs were made every time I had to do a certain mini game that involved slowly 'driving' to the correct answers of different questions... 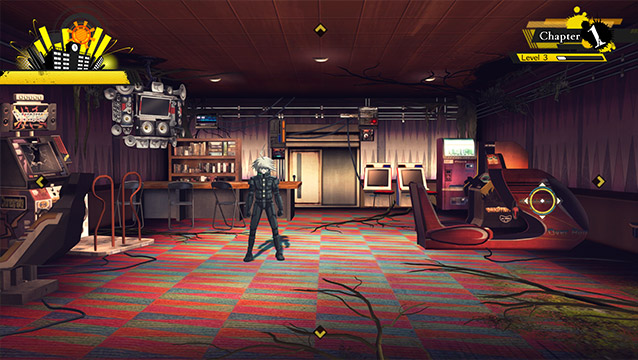 There is more than just the despair of suspecting one's friends of murder in various class trials, however minor these extra features are to grander scope of the adventure. Similar to the likes of various point & click/adventure game titles, and the original Danganronpa: Trigger Happy Havoc too, players can roam around the campus in a first person perspective to reach different locations for one reason or another or talk to the different students. Like prior entries, there are also intentional lulls in the storytelling, so it is fitting that players spend their free time attempting to build friendships... to, well, make it all the more cruel in their probable eventual death, or betrayal, after you attempt to do so. Which bears mentioning that although the overall cast does have some standouts (Danganronpa 2's Nagito still remains as my uncontested favorite), they don't feel quite as charismatic as they should be since the localization as well the general writing quality comes across as noticeably less sharp than that of earlier games.

Much of the game waits excruciating long to talk about main plot details, so it feels fitting to deliberately wait on discussing Danganronpa V3: Killing Harmony's actual narrative instead of just pacing as well.

It's easily the biggest expectation fans will have going in and what I will say to them (without direct spoilers, of course) is that the overall story -- especially with how it ties into prior titles -- is likely to be extremely divisive. There is no real middle ground in reaction towards the conclusion and is very much a love it or hate it bargain in the truest sense.

Even now I am left sorting through a whole lot of mixed thoughts, regardless of how exciting and extravagantly presented the many twists and turns are throughout V3, including the end. But I suppose for as familiar as much of the gameplay remains in the third entry, for better and for worse the long-awaited conclusion absolutely delivers on some insane narrative twists that many fans should not expect. 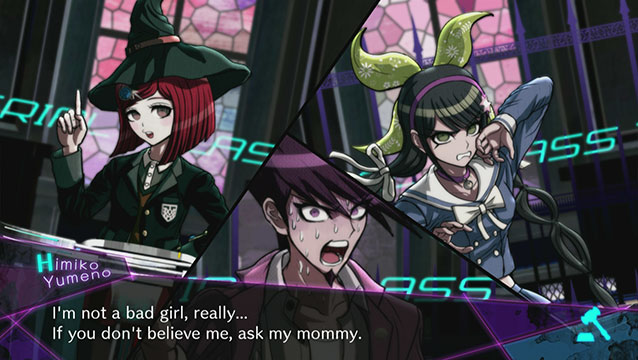 With one foot firmly planted towards feeling familiar and the other towards completely shattering expectations Danganronpa V3: Killing Harmony truly relishes in its chaotic order. It reprises its strengths in delivering exciting murder mysteries, an off-the-rails narrative with many crazy twists, and a completely strange cast of characters while also retaining old issues like awkward pacing and obnoxious mini games. As a finale, however, it spares no expense towards a resolution that will likely to be incredibly divisive regardless of whatever expectations one had going into it. Danganronpa V3: Killing Harmony deliberately aims to leave fans brimming with either hope or despair, and I find myself conflicted by both opposing forces in ultimately feeling just as appreciative in its intent as I do betrayed now that it is all over.

+ Narrative goes through some truly insane narrative twists and turns

-  Hate it or love it conclusion

Danganronpa V3: Killing Harmony presents a stark contrast in showcasing more of the same, but often better, with its gameplay while the narrative conclusion itself firmly dividing what fans think they know and love. It is a bold conclusion that is extremely surprising in its execution and unsurprising in how likely divided it is to leave already existing fans of prior entries