Most handheld role-playing game fans are likely more than aware of the critically acclaimed Etrian Odyssey series on 3DS.  What is less common knowledge is that the not-quite-as-popular PlayStation Vita handheld has also had an abundant selection of dungeon crawling RPGs as well. Granted, the gem offerings within Vita's handheld circle are far more inconsistent in comparison.

One of the standouts of Vita's batch of dungeon crawlers was the original DRPG Demon Gaze. Though it was certainly not flawless, it was an incredibly colorful title that also made several strides to its game design that caused it to be easier to approach than most in the subgenre.

Three years later, players are now able to play its direct sequel, which is plainly named Demon Gaze II. Does the exuberant successor have the heart that could charm a demon or should one avoid its memorizing gaze the second time around? 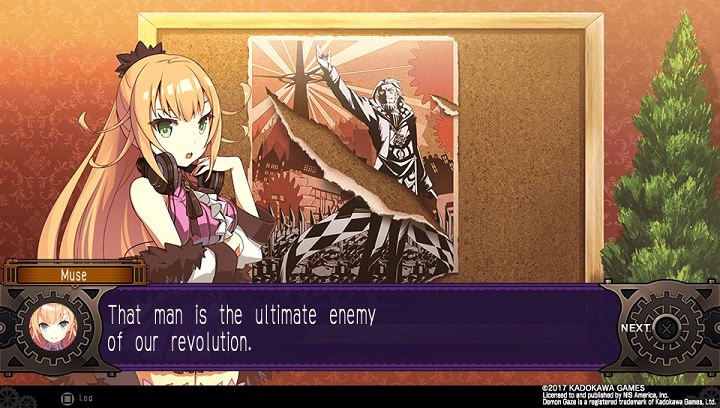 After one quick glance, it becomes rather clear that Demon Gaze II doubles down on its anime influence. With the loose narrative setup predicated upon revolutionists trying to save the region (Asteria) through the power of music, it will likely feel like you have seen this story in some anime before. Chances are you probably have. Couple it further with the JRPG amnesiac lead trope and the main villain Magnastar, whom may-or-may-not-be misunderstood, will only solidify this strong sense of narrative Deja Vu. However predictable it may be, Demon Gaze II is presented with more than enough personality for its world and characters to have it be entertaining enough to see it through to the end (post-game aside). Well... so long as the far and away worst character from the original game (Lezerem) -- who, unfortunately, makes a return in II -- is not on-screen.

In several ways, Demon Gaze II tries to be more approachable than its predecessor -- or even most DRPGs, to be honest.

Most applications to this mindset tend to be more subtle instead of simply being easier/having faster turn-based battles than most in the subgenre on the default difficulty. One of the quickest changes that returning players will notice is that they will no longer bleed financially every time they return to the main inn like various Etrian Odyssey games (in which the original Demon Gaze poked fun at by having a financially shrewd innkeeper) and upon returning from a dungeon the party's full recovery is free with no real strings attached.

Another welcome change, specifically for lower difficulties, is the incredibly generous option outright retry battles after a party wipe. Instead of simply restarting the battle the player returns with full health/MP, star gauge (which is needed for certain mechanics like fusion or party-wide buffs) and, most surprising of all, all inflicted damage upon foes and bosses too. Demon Gaze II certainly takes initiative to be all the more inviting to newcomers to DRPGs. For hardcore players, they should be plenty fine with the higher difficulty options available. There's also an entire extra story mode after the main campaign which dramatically raises the level cap(/challenge) and it even forces players to play on the second highest difficulty in order to see it through. Unlike the main story, which is mostly self-contained, the post-game narrative is also full of direct callbacks to the first Demon Gaze and can easily double the standard playtime too, which is a neat addition. 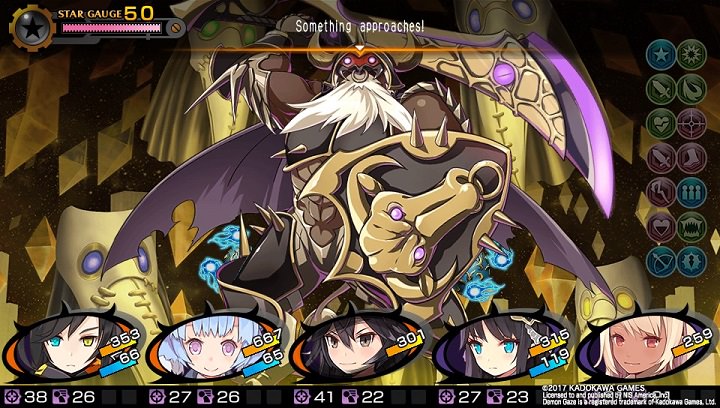 At the same time, Demon Gaze II is willing to sever some tried and true approaches to traditional dungeon crawlers as well.

Subgenre staples like being able to create customized party members are nearly entirely absent in Demon Gaze II, for example. Players are only really able to alter the look of the main male protagonist and choose between one of three "alignments" (which apparently slightly modifies the tone of inconsequential dialogue choice options in the story and learned abilities at specific leveling thresholds).

Otherwise, all (demon) party members that join the player, either via the main story or optional sidequests, are preset in their appearance and abilities with the exception being to choose where to allocate stats per level up or their occasional "Liberty Skill". It may be tough for subgenre purists to adjust to but the preset allies do tend to be far more well-rounded in the vital skills that they acquire naturally than what was formerly separate classes were in the original. The one huge shame, however, is that most party members start at level 1 regardless of how late they may be unlocked (with only three exceptions). Like the original Demon Gaze, though, gear tends to matter far more than regular base stats, so someone that starts at level one is not entirely hopeless when attempting to catch up. That and some late-game party members are really strong. 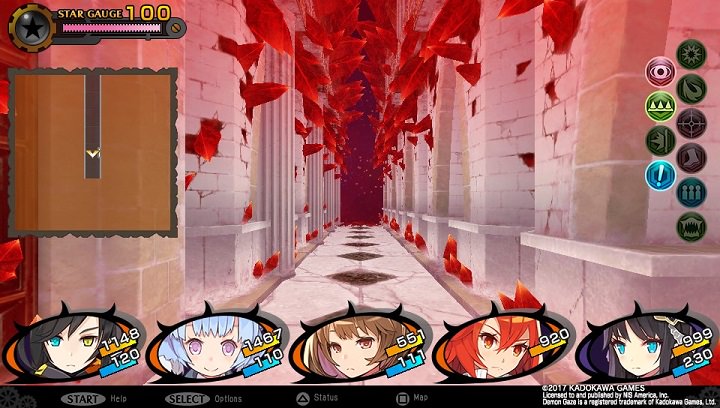 Speaking of which, there are some other new mechanics in Demon Gaze II, though they are hit & miss in their execution. In battle, the main character will eventually obtain the ability to fuse with another party member. While this is fairly cool conceptually, I did not once find it that practical to actually use because you essentially sacrifice the use of a party member for several turns in the exchange of quick burst damage. The other mechanic that isn't fully fleshed out is the ability to perform "maintenance" on demons... which basically involves going on dates and doing a touchscreen mini-game. Thankfully, the mini-game itself is not nearly as tasteless as some other Vita games (looking at you, Monster Monpiece), but it is clear that this mechanic is tacked on purely because most of your potential party members are cutesy anime ladies (even if it has more tangible rewards like unlocking strong passive abilities, direct stat increases, and giving some spotlight to otherwise entirely overlooked characters in the main narrative.)

Aside from those new additions, Demon Gaze II should otherwise feel fairly familiar and not always for the better. Developer Experience Inc. has a bad habit of directly lifting certain dungeon themes from their prior games (including non-sequels like Stranger of Sword City) and this issue surfaces yet again in Demon Gaze II. On the positive side, players are rarely in any one dungeon for all that long so the fatigue in certain mechanics or themes does not last too long *shakes fist at the underwater dungeons that do not allow players to use magic*. The other returning mixed key feature is the loot system that is incredibly reliant on RNG. Because, like the original, pretty much all useful gear is obtained via specific summoning circles in dungeons and hoping to get what you want upon defeating the enemies that appear.

Last, but certainly not least, to mention is the presentation, which remains incredibly vibrant regardless of its admittedly low production values.

All the characters have really distinct 2D portraits and they have made little touches like how the enemies in combat now move so battles feel more lively. The bigger step up seems to be the soundtrack, which has more musical variety than the first title. Going from catchy swing-like themes in the main tavern to some unobtrusive vocaloid accompaniment to other tracks really works well with the game's hyper personality. That said, the clear standout of the entire soundtrack is without a doubt the piece "Starllica", which would feel right at in some sort of Ar Tonelico game (even if it lacks the made-up language of hymnos.). 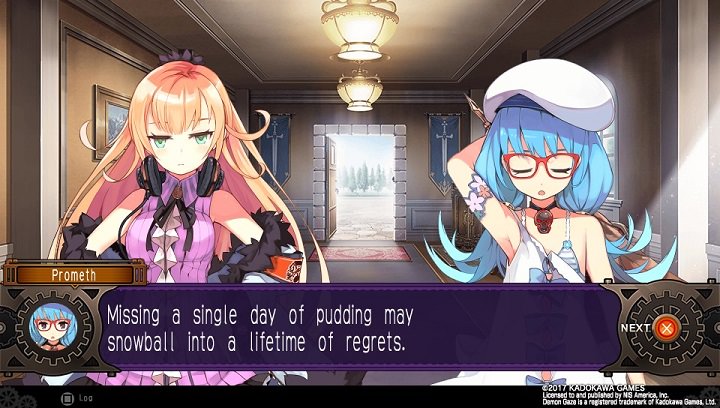 Demon Gaze II is ultimately a better game than its predecessor. It takes the initiative to become more approachable for newcomers, has nearly twice as much content than the original for serious players, and introduces plenty of subtle refinements and mechanics.  Even the storytelling itself, while still really predictable, has seen an improvement too. What Demon Gaze II truly lacks is much to make it feel genuinely fresh and can come across as a bit too familiar at times for players of the original. If one is fine with the prospect of more of the same, but generally better, then Demon Gaze II is better viewed as an extremely solid DRPG offering on Vita (and one of the very few on PS4) instead of the revolution the narrative tries to embark on.

+ Energetic presentation with an equally eccentric cast of characters

+ Makes quite a few strides to be more approachable, such as very generous retry options on lower difficulties

- Most character customization in combat has been replaced with preset party members. Which becomes a bit more glaring as almost all of them start at level one...