I have come to realize that there is a small subset of Compile Heart titles that I actually don't mind. While I have grown more than weary of a certain flagship franchise of theirs' around gaming-themed goddesses that use referential humor as subtlety as a punch to the face, last year's Trillion: God of Destruction proved to me that there is an earnest part of Compile Heart that is also willing to boldly try out new ideas as well in an intriguing RPG framework.

Following suit towards this philosophy is their newest dungeon role-playing game release named Mary Skelter: Nightmares on Sony's PlayStation Vita. Should one boldly climb through its bizarre depths or immediately point their feet towards the exit? 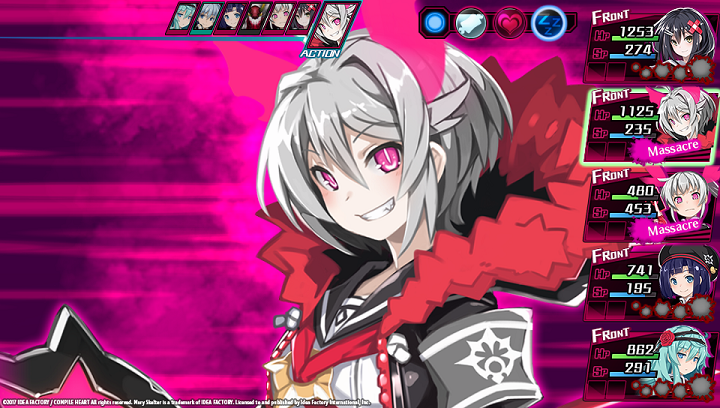 Mary Skelker. Nightmares starts off in an deep underground crater of a once Japan city that is now bequeathed the more fitting title of something that is now a living prison/tower called 'Jail'. Day in and day out humans are tortured by demonic beings named 'Marchens' in Jail until one day the main protagonist Jack is rescued by a woman that goes by the moniker of 'Red Riding Hood.' His escape was not unconditional, however, as it was actually his close friend Alice that was scouted to become a Blood Maiden -- those with a special aptitude to fight Marchen -- for a special resistance group and he was taken along as Alice request. So after escaping the tower both Alice and Jack eventually agree to help this resistance group called the 'Blood Team', which primarily fight Marchen with Blood Maidens as well as try to explore Jail, to discover a means in which mankind can truly escape the underground hell.

But it is the mechanics, not the dramatics, that mostly define the game's identity. And there are a whole lot of gameplay mechanics within Mary Skelter: Nightmares, even if the moment to moment gameplay is not all that complicated. On the most basic level it borrows a lot of elements of more recent first person dungeon crawlers on handhelds as you explore various new areas and battle foes in random turn-based combat.

To make more direct comparisons, it is sort of an amalgamation of something like Persona Q and Experience Inc. dungeon crawlers like Demon Gaze -- except with a huge obsession towards blood. Lots and lots of blood. 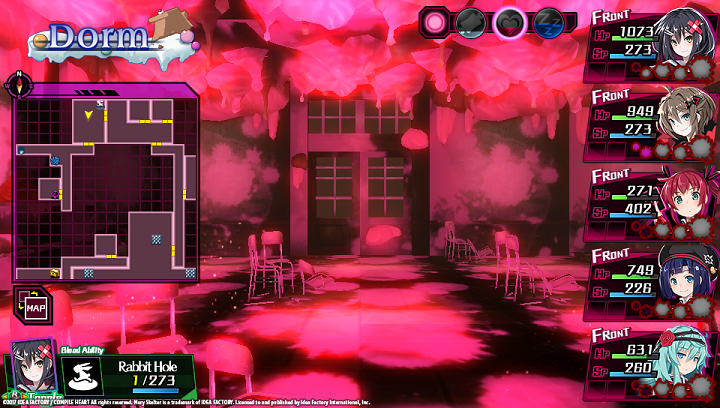 Blood is a lot more than just a theme and goes into nearly every facet of the gameplay. For example, the turn-based combat starts out straightforward enough with a heavy emphasis on exploiting enemy weaknesses. The twist is that blood will literally splatter on the heroines after exploiting an enemy's weakness, or 'overkilling' them. If enough enemy blood splatters onto them they go into a 'Massacre' form which powers-up skills, gives them access to new ones, as well as regen their HP/SP if even more blood splatters onto them during this form. It is a neat system albeit one that is heavily momentum based. Though, I do find myself wishing the UI showed what weaknesses players have already exploited, ala recent Persona games, instead of forcing players to remember every time a battle pops up.

But there are drawbacks to this system as well depending on the circumstance. Basically, if heroines get KO'd too many times, or consistently takes heavy damage, they run the risk of becoming corrupted. So instead of going into the Massacre form they go into the uncontrollable 'Blood Skelter' mode instead which causes them to randomly attacks friends and foes alike. This is where the formally useless main character comes into play by... also splattering blood onto the heroines. Except his blood is good, I guess? Anyway, he eventually uses a 'Mary Gun' that shoots his own blood to gradually remove the Blood Maiden's corruption. He can occasionally shield the Blood Maidens from harm too, so I guess he can be somewhat helpful, um, every now and then. The game probably would have been okay without Jack's whole maintenance mechanic, to be honest, but it does add an extra layer of strategy especially during bosses.

Speaking of which, there are creative aspects to the first person dungeon crawling too. Most dungeons have unique visual themes and occasional puzzles, and even the Blood Maidens themselves also bring a distinct flavor to the methodical dungeon crawl throughout.

Alice can essentially create a portable save point/means of escape while the member 'Snow White' on the other hand can literally drop a bomb to open up new areas. To add a sense of tension during dungeons, much like that of the main narrative, there is even an invincible boss (until certain parts in the story) that can occasionally stalk the player mid-dungeon and the player is encouraged to run away or turn and fight enough to temporarily disable them. With tons to explore, player beneficial roulette triggering left and right (which would require an explanation onto itself), and occasionally a sense of dread, the standard dungeon crawl rarely feels dull in Mary Skelter (though, if you are too thorough, you may find certain dungeons to be quite long). 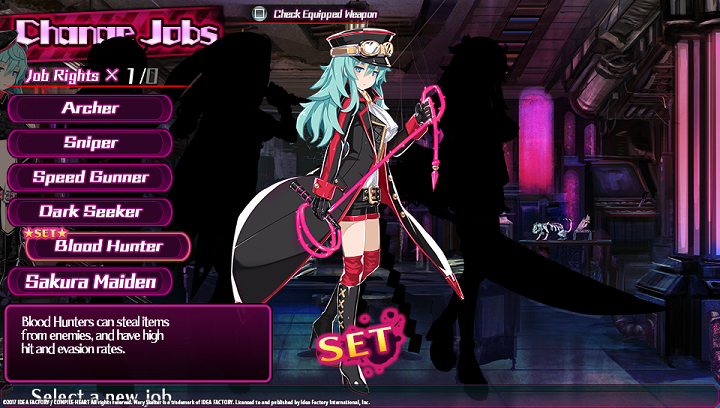 To feed into both the dungeon crawling and combat, the central hub outside of Jail also hosts a wide range of mechanical benefits. One of the most important is that it is where the player can change jobs for the Blood Maidens, which are basically as big (if not bigger) of a deal as subclasses are to Etrian Odyssey, because you can carry over pretty much all skills of any former jobs into your new one (well, skill slots permitting; but those can be increased). Other facilities exist including shops, places to upgrade gear, the ability to de-level heroines for higher base stats like various Disgaea titles, and a place to take requests for various rewards. Players can also give gifts to the Blood Maidens to shallowly increase their affection, though it is only really noteworthy because it influences the ending sequences and the frequency of optional events that feature them.

Oh yeah, there is also an awful, perverted gameplay system called 'purge' in which I try and pretend does not exist at all.

Especially since Jack can essentially get mostly the same effect as the Purge mini game from his Mary Gun instantly in combat without a creepy rubbing mini game with the generally underage looking cast associated with it. But considering Compile Heart is the developer that also brought Monster Monpiece, I guess should not have been too surprised it exists, and thankfully it is not quite as bad as that (but, that's not saying much). Aside from that very unfortunate feature, no other aspect of the presentation really offends with its visual novel styled cutscenes, varied 3D dungeon motifs, and some solid whimsical musical tracks. 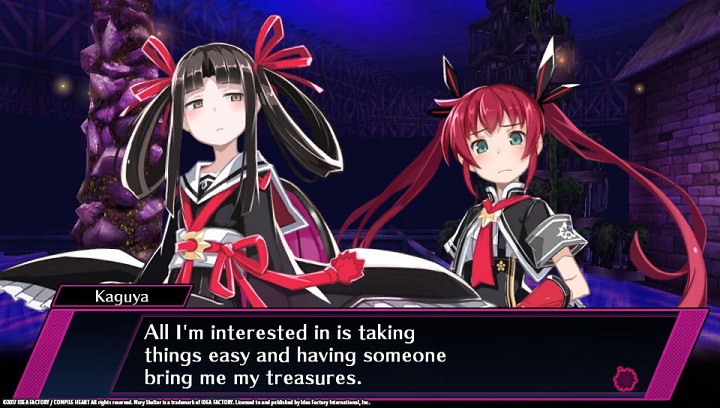 This far into the Vita's life cycle, one is not really pressed for first-person dungeon-crawler options. In spite of this fact, Compile Heart has exceeded expectations at crafting a worthwhile and unique take among the subgenre. With plenty of variety to the moment-to-moment gameplay, and surprising depth to its systems, it is worth checking out Mary Skelter: Nightmares in spite of occasional rough edges (why does that gross 'purge' mini game exist?).

+ Intriguing setup that creatively influences a lot of gameplay systems

+ Robust job system that is quite rewarding over time

- If you are thorough certain dungeons can last really long

- Combat UI could have been improved, especially for a system that is all about exploiting weaknesses

- Why is the 'purge' mini game even a thing?

Mary Skelter: Nightmares succeeds in making a fresh, fun take on first person dungeon crawler RPGs despite taking an occasional toll with its over-obsession towards blood in more ways than one