Atlus USA knew that with a cliffhanger as cruel as the one that Utawarerumono: Mask of Deception ended on, fans could not wait very long for the sequel.

So, four months after its release countless burning questions are turned into decisive answers. Taking the form of the conclusion to the visual novel/strategy role-playing-game trilogy called Utawarerumono: Mask of Truth, it makes for an absolutely triumphant example among those willing stand alongside with it until the end.

Before elaborating on its strengths Utawarerumono: Mask of Truth may very well be one of the most demanding games ever to get into from a pure storytelling context.

The bare minimum to even approach it is to at least finish Utawarerumono: Mask of Deception due to huge storytelling revelations, intricate world-building, character development, as well as how Mask of Truth makes next to no real effort to catch people up to speed in regards to any of these. To go one step further, it even closes several longstanding story threads that date as far back as the original Utawarerumono on PC back in 2002 (and the only real English options for that are a less-than-legal PC fan-translation or the 2006 anime adaptation.) It is a trilogy for a reason and Utawarerumono: Mask of Truth's storytelling makes that abundantly clear as a final chapter that wraps it all up. 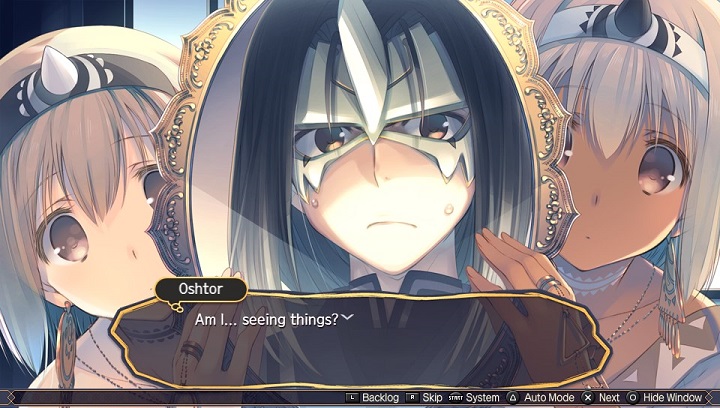 With that disclaimer out of the way, Mask of Truth rights many of the wrongs of its predecessor. Often times, the previous title -- Utawarerumono: Mask of Deception -- was frustrating to play with how it was structured as a visual novel. The underlying storytelling was great, but the pacing was downright insulting. It felt like for every hour of serious storytelling the player would be subjugated to three or more hours of often pointless filler and anime ''fanservice' immediately after making it incredibly difficult to recommend as a whole. Oh, and for those that went into it expecting more frequent strategy-RPG gameplay would be lucky to see a battle every few hours, so that also did not help.

But for a patient crowd that were able to surmount such shortcomings Mask of Truth certainly delivers and is a far more well-rounded adventure. While I would hardly say it is concise, as is the case with most visual novels with their long-winded banter (especially fifty-plus hour ones), it is very rare that the player will feel like their time is really being wasted (except maybe a few unfortunate 'fanservice' scenes, though they are significantly toned down from the previous game), despite not always placing the main conflict at the center stage. The cast of characters make doubly sure by acting much more mature, and the narrative's tone certainly reflects the change in mannerisms as a whole. 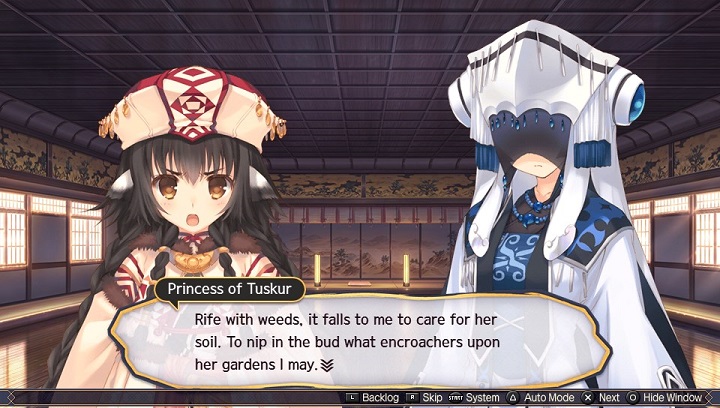 Speaking of which, it is actually quite impressive how many fairly established characters of the previous release become much more earnestly developed as individuals through the course of Mask of Truth. Seemingly mundane day to day moments lead to surprisingly nuanced backstory moments, for example.

Honestly, it's difficult for the player not to connect and resonate with the cast's plight, especially the lead character, knowing that they are forced to carry on in spite of some really heavy burdens and bleak circumstances.

Of course, the main storytelling itself in general is an extremely touchy subject (do you know how hard it was to find screenshots without blatant spoilers?). Every other breath about it can easily be interpreted as major spoilers of the previous title at the very least. What I will say is that while I would more than argue that the Mask of Deception felt like half a game (that cliffhanger really did not help), Mask of Truth conversely feels like it could be separated into two entirely separate role-playing game narratives and each one would feel complete on their own. 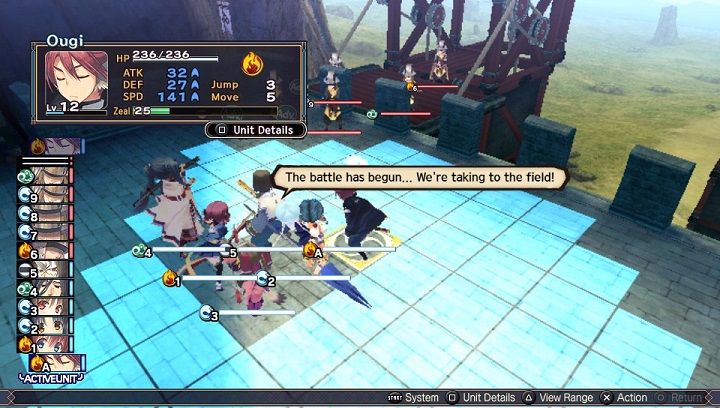 The reason I say that is because there are two dramatically different story arcs between its first and second half; the first being more focused on political intrigue and wartime conflict while the second arc is more about the greater existential questions of the world itself. Admittedly, it does lose some luster in the game's second story arc, with less compelling antagonistic figures primarily (kind of reminding me of Tears to Tiara II: Heir of the Overlord in this regard), but there are still pretty powerful and poignant storytelling moments throughout. I am not going to lie, I got more than a little misty eyed during several iconic scenes. Which is a tall order for me and games storytelling, and something that Mask of Truth executes brilliantly.

It is easy to forget that there is an entire strategy-RPG component as well when caught in the massive visual novel story. Alright, not as easy this time around because battles are a fair bit more frequent and more involved. Like its predecessor, Mask of Truth's combat is a turn-based affair with an emphasis on chaining skills together mid-combo with real time inputs to increase their potency. With newly added co-op follow-up attacks, including tag-team special moves in 'overzeal' states, both allies and foes are noticeably more capable, making confrontations more engaging and challenging too. 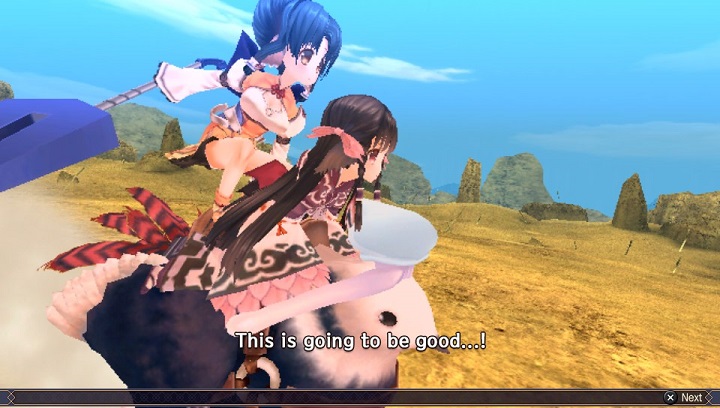 Mask of Truth also improves the variability of battle encounters as well. Main story confrontations are fairly good at changing up objectives and often times have multiple parts that forces players to stay on their toes. The final battle in particular plays upon a sense of combat escalation that is crazy in a way I have not seen since basically Devil Survivor 2: Record Breaker. As an aside, what is also a neat and subtle improvement is that -- outside of the main story -- there are other means to hone one's combat skills. The first of which are random skirmishes against fellow allies, which help grant points to raise certain stats, but the more intriguing are 'Munechika's Trials'. Munechika's Trials are basically really in-depth tutorials giving one instances to fully understand nitty-gritty combat mechanics and character specific nuances. While it likely would have seen far more use in the prior game (as players should have plenty of combat knowledge by now), it is a neat addition and a good way to get extra passive skills to equips.

For as excellent as Utawarerumono: Mask of Truth is as a sequel, and frankly as a visual novel, it is a rather inconsistent port on Sony's PlayStation Vita.

A fair bit worse than its predecessor to the point of interfering with story and combat scenes, actually. For instance, in busier cutscenes (with the underwhelming 3D engine in particular) the audio will randomly cut out which is somewhat distracting at times. But the bigger grievance is that this also can occur during combat, and I have seen a few minor instances of it throwing off my muscle memory for attack combos because of it. It is not game-breaking, but still disappointing for an otherwise perfect fit for the portable. But when faced with the stellar Japanese voice acting, impactful soundtrack, and gorgeous character art, I suppose I can forgive the occasional technical hiccups for what is primarily a visual novel. 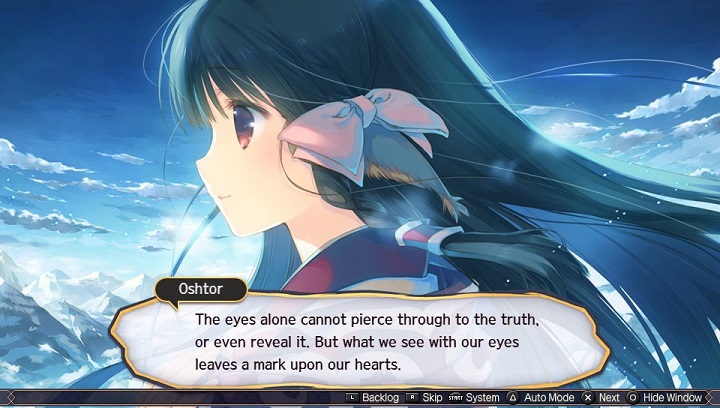 By expertly wrapping up what would have otherwise been an extremely inconsistent trilogy, Utawarerumono: Mask of Truth almost single-handedly justifies the whole journey up until this point.

It is not without its caveats, however, with a mandatory to play predecessor (arguably almost two), and some nagging grievances with the occasionally spotty visual novel pacing as well as handheld port. Still, it serves as one of the absolute best visual novels out there on the market, and it just so happens to have some pretty fun strategy-RPG gameplay at times too. It is an amazing tale that makes it even more of a shame that it demands so much out of the player beforehand to fully appreciate it, but for those that do will be more than glad that they did.

+ Intricate, and sometimes extremely poignant, visual novel storytelling that provides a really satisfying conclusion to the trilogy during the course of its lengthy adventure

+ Develops most of its primary cast really well

Managing to weave intricate world-building and excellent storytelling Utawarerumono: Mask of Truth should more delight those that are patient enough to trek past its shortcomings towards the wonderful conclusion of the trilogy