Krater just came out today but I've been playing the heck out the beta for the past couple of weeks. If you've never read my preview or heard of the game, Krater is a cross between Diablo and X-COM. It also happens to take place in Sweden after some horrible Apocalypse-like event. Krater focuses on giving players a team of three lovably odd characters to control and slay monsters with. Each character fills a specific team role, such as a medic or heavy melee attacker. They all have bizarre things to say and really add flavor to the whole experience, but is the experience any good?

The first thing you'll notice is Krater's distinctive art style. I'm not entirely sure what it is, but I like it. It mixes cartoon-like characters with intense bloom, particle effects, and washed out landscapes contrasted with flashy neon lights. In some ways, Krater's carefully crafted environments take me back to Fallout: New Vegas, with the glitz and glam mixed with dust and dirt. I dig it, and you might too if you have a video card capable of DX11 features. While you'll probably be zoomed too far out to appreciate all of those details, it still looks great overall. Another part of the Krater experience is the soundtrack. In short, it's my one of my favorite parts of the game. There's (what I'd assume is) Swedish rock, 8-bit music, and a driving electronic score. All of it is grimy and fits the tone of the game perfectly. In some ways, it actually adds creep factor to the odd inhabitants of post-nuclear Sweden, as it never allowed me to feel entirely at ease with its muffled synths and subtle beats. The soundtrack really adds atmospheric ambiance to a game that already has it in spades. 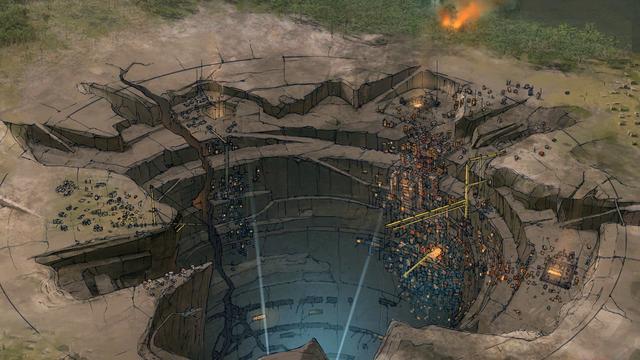 The audio in general is fairly strong. There are strange, discomforting voice overs that seem to switch between English and Swedish on a whim. I don't know why this is the case, but I dare to ask too many questions. Krater just is, and I love it for whatever the heck it is. The environmental sounds and combat noises are suitably appropriate. They aren't as noteworthy as the soundtrack but certainly sound great overall.

None of Krater's presentation would matter if the gameplay wasn't good. Thankfully, I'm happy to report that Krater does a pretty good job of being fun. While it sometimes has response issues, particularly with unit commands, I generally enjoyed hacking and slashing my way through underground cellars and mysterious caves. The squad can be adapted on the fly through a quick menu. In fact, every element and stat can be checked or managed from various menus, each of which can be found at the bottom of the screen. Players can customize their favorite troops with stat-boosting implants, equip new weapons recovered as loot or purchased, and swap out role types to better balance squad dynamics. It's an extremely flexible system and allows for adaptation in the face of overwhelming odds.

One of Krater's unique quirks is the permadeath and injury system. If one of your little mercenary buddies is knocked down, he/she needs to be taken to a doctor ASAP. A permanently-injured party member can seriously debilitate a player's squad in intense battles. If a mercenary is killed off completely, that unit is gone, including all of the experience it gained. Thankfully, there's a recruitment system where players can purchase new battle buddies to add to their squad. Unfortunately, these soldiers are raw recruits and must be leveled up from scratch. While I didn't have any issues with the system, it could certainly pose a cumbersome challenge on a higher difficulty.

As of this review, the multiplayer aspect is not completed. As such, I can't evaluate what could be the biggest selling point for this game. Krater is fun as it is in singleplayer, so I can only imagine it'll be a blast when players buddy up and go journeying about the wastelands. Still, for the $15 price-tag, there are plenty of quests and side missions for players to stick around the solo mode. It's good to get your money's worth, and even better to exceed it. Krater manages to do both and is an excellent value. Even if you get the $20 version, which comes with the soundtrack and a powered-up Medikus, you're still getting a great deal.

Despite the number of ARG competitors about (Diablo 3, Torchlight 2, etc.), Krater sticks out among the crowd. It takes a squad-based approach to a usually solo affair and brings a quirky sense of humor and style to the genre. While it may have a few minor issues and bugs, Krater is a fun title and brings a fresh take on the ARG genre in an affordable, attractive package.