DISCLAIMER: As I wrote this review, I found it difficult to put into words the emotions I felt from playing Spec Ops: The Line. As such, prepare for a lot of anecdotal discussions and open-ended questions. While this may be a review, it's a broader introspective evaluation on the modern shooter and the player's role in said genre. Prepared? Then read on.

This review is based on the PC version of Spec Ops: The Line.

"War is hell," said General William Tecumseh Sherman. It's a quote that modern shooters often toss about, but one which no video game has ever embraced the meaning of. Most developers glorify tearing hands, feet, and other limbs off of generic enemy soldiers with as much gore as humanly possible. Through the glorification of war in gaming, the meaning of life is cheapened with half a magazine of 5.56 ammo. In these war games, there are only heroes and villains, with the most morally-grey aspects of war reduced to cheap marketing tactics like Call of Duty's "No Russian" mission. Spec Ops: The Line has taken all of these tropes of the modern shooter and thrown them in my face with disturbing clarity. After playing, nay experiencing, Spec Ops, I may never play a shooter with the same mindless power fantasies ever again.

The premise behind Yager's cover-based third-person shooter is almost mind-boggling simple and generic. A US Army commander by the name of Colonel John Konrad has led the Damned 33rd Infantry Battalion into Dubai to evacuate the populace from history's largest sandstorm. Players, taking the role of Captain Martin Walker, are to investigate Konrad's whereabouts and, if necessary, save the Colonel and his men. Spec Ops even leads you to believe that this generic premise is indicative of the entire experience with the opening helicopter pursuit sequence. The sense of deja vu is undeniable; I've been here, shot helicopters down with a mi***un, and done this turret sequence so many times before. Once you get to the ground, however, Spec Ops mutates into one of this generation's most morally, mentally, and emotionally taxing shooters. At the games conclusion, I was left battered and bewildered by everything I had seen. The conclusion only serves to make the games unsettling events that much more horrific. As much as it may have impacted me, Spec Ops is first and foremost a game, so is it any fun to play?

To say Spec Ops is fun belies the game's contradictory, complicated nature. At every point during the campaign, I felt the juxtaposition of a shooter framework with a strong anti-war sentiment. In everything from the shooting to the graphic dialogue and horrific war crimes committed, I felt uncomfortable. Yager clearly intended this game to disturb and unsettle. Enjoyment and fun are not the words I would use to describe my experience with Spec Ops. I would describe my five-hour trip through hell as uncensored and raw, striking nerves the whole way through. Whether I was gunning down rogue American soldiers or deciding the fate of a CIA agent and a group of civilians, Spec Ops made it tough for me to want to continue playing. But I had to see it through. I had to see what shade of monster Walker was becoming.

While all of this may sound like I'm rambling, these thoughts are the predominant reason for my constant pursuit of Konrad and the truth. I had a hard time stomaching the thought of killing civilians and murdering countless US soldiers. While this may sound trite in lieu of "No Russian", believe me when I say the dead will haunt you throughout the campaign...and perhaps beyond. For every enemy you kill, you constantly ask yourself why you're shooting dozens of people. In all the chaos, Walker can only defend himself with ***ue notions of wanting to be the hero, of trying to be Dubai's savior. But what of us players? Why are we massacring virtual meatbags that scream for mercy, drag themselves on the ground missing limbs, meatbags that have casual conversations about sharing gum? Are we truly the desensitized monsters that men like Konrad have become? I wish I knew the answer.

By the time the credits roll, you'll wonder yourself whether Konrad was ever the true antagonist. No matter what choices you make, Walker still becomes a sa***e, ruthless killer. If you've seen Apocalypse Now, you understand just how insane war is. That madness is not lost on Walker or the two men he fights alongside with, Lugo and Adams. All three men experience the conflict differently, and all three will change from the people they began as. Does Spec Ops change the player as well?

In these reflective moments, the jarring reality that this is just a game readily becomes apparent. There is a constant barrage of achievements that applaud me for the decisions I did or didn't make. While it may not bother some, I felt like it broke the immersion when a pop-up announced I had 'crossed a line' or 'aimed high' on targets. Isn't this game supposed to be more than just a game? In some ways, being a shooter has ensured the full impact of Spec Ops will never be realized. Since we are simply playing a game, it only leaves lingering doubts in our minds once we put the controllers down. For many gamers, Spec Ops may never resonate with them in the same way that it struck my nerves. I sincerely hope, however, that they at least have an open mind to the horrors that await them beneath the sands of Dubai. If you can walk away unmoved by what takes place, you may already be more of a monster than any of the Damned 33rd or the Delta soldiers.

Mechanically speaking, Spec Ops is a fairly competent shooter. It plays a lot like Gears of War, where players take cover behind sturdy objects and use big guns against enemy targets. Where Spec Ops differs is in the flow of combat. There's a relentless push forward, a constant thrust urging players onward. That's carried over into the relatively quick kills and brutal executions that emphasize and reward speed. I found myself stressed and overwhelmed by constantly having to progress forward, fearing I would be quickly overrun if I cowered behind cover. I never felt like camping behind objects was safe as the enemy AI, however basic it can appear, always outflanked me and tore me to shreds. If I have one complaint, it's the quirky control scheme. Some of the buttons are mapped to more than one function, making it possible to sprint into cover when you actually meant to sprint around a target. The cover system, which people have also complained about, didn't really trouble me. Once or twice I was left exposed to enemy fire, but I didn't really feel like it was a major issue. 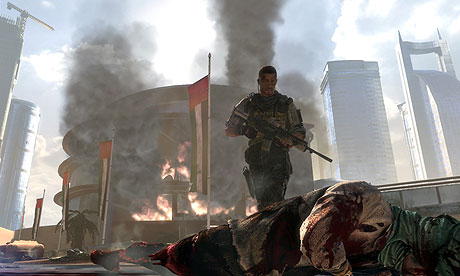 The weapons themselves feel powerful and deadly. When I pulled the trigger, soldiers often crumpled or doubled over, coating the walls in red, messy spatters. It felt awful to gun down people who were likely as desperate as I was to survive. In the end, however, I had to regard the violence as a mercy upon my foes. The way they begged for help or clutched massive wounds didn't make it any easier for me to execute them. Even more disturbing was the fact that I was treated to additional (typically scarce) ammo for finishing them off, forcing me to do the deed. If Yager wants to bother players, this is a great way to do it.

The aforementioned squadmates, Lugo and Adams, are great companions on this trip to insanity. They offer constant tactical feedback and aren't bad shots themselves. They can be given a few commands to help alleviate Walker's pressure, but act independently for the most part. The banter between all three soldiers is always interesting, well-written, and appropriately frantic when things get absolutely FUBAR (and they really get bad). Players will likely recognize Nolan North's voice as Walker. I felt North did an admirable job taking on a much more mature character. Though the (sometimes gratuitous) swearing may offput some, I recommend you grit through it to see the shocking conclusion.

There's multiplayer in Spec Ops, but I recommend you skip it. The game works when the servers aren't being slammed, and there are some cheap thrills in modes like Chaos (free-for-all) and Buried. However, it's clear the singleplayer was the focus of development. I felt like the MP didn't carry the same weighty feeling of combat. It also lacked the emotional impact that the narrative hit home. If you purchase Spec Ops, stay for the campaign, not the compe***ive multiplayer.

The technicals behind Spec Ops are fairly strong. The visuals, though lacking when compared to games like Battlefield 3, are suitably gritty and do the job well. Some of the character models look great, and the ruined city of Dubai is beautifully rendered. When the dust kicks up from explosions and gunfire, the air is obscured and a tactical element is layered onto the shooting. The particles aren't just for looks; they can really come in handy when the defecation hits the oscillation. The audio is absolutely fantastic. With a fully-licensed soundtrack and some haunting musical scores, Spec Ops succeeds in mooding you out. Everything here is meant to unsettle you, and the soundtrack does an admirable job fulfilling this roles. As I mentioned earlier, the great dialogue is well acted. The sound effects are also great; they really add to the visceral impact of combat and the narrative. If you're expecting the next generation in A/V though, you'll be disappointed. Then again, if you're coming for that, you're not playing the right shooter.

Is Spec Ops the best shooter of 2012? Probably not, but that's for a reason. Spec Ops is a criticism of the modern shooter, taking the fundamental concept of the war game and inverting it. It may seem like a blatant copy of Apocalypse Now and Heart of Darkness, but don't be fooled; there are far more horrific things to experience in Spec Ops than you may expect. Prepare to have your moral and ethical codes challenged in this game, and always remember that not everything in Dubai is as it seems. But this you already know. The rest you'll just have to figure out for yourself. Welcome to Dubai, gentleman.

+ Incredibly deep story, filled with hidden intel to unravel more of the mystery

- The multiplayer is also incredibly barebones

- Some odd control bindings can cause trouble

- Occasional bugs and technical glitches here and there

Spec Ops is a great, mature third-person shooter that actually makes you regret the choices you make. A deep story is coupled with great dialogue to create an excellent campaign.

Want to win a Steam copy of Spec Ops: The Line? Simply tell me what you thought of Apocalypse Now and why you're excited to play Spec Ops. Winner chosen randomly on July 6th at 9 PM Eastern.