Inevitably, there“s one major annual contest for game superiority between two rival publishers, EA and Activision. In all of the potential genres where the two companies could butt heads, the main battleground is the First-Person Shooter. While Activision continually releases new iterations to the Call of Duty franchise, EA mixes things up with the Medal of Honor and Battlefield franchises. If it was Call of Duty: Modern Warfare 3 vs. Battlefield 3 last year, it“s Call of Duty: Black Ops 2 vs. Medal of Honor: Warfighter this year. Or so everyone says. The truth, however, is that the contest between the two games really doesn“t offer grounds for comparison. Yes, both titles are modern military shooters, but each takes a vastly different approach to the subgenre of military FPSs than the other.

Starting with Black Ops 2, you can immediately see the familiar Call of Duty template; an epic, sweeping campaign, the ever-popular IW 3 engine, and the sacred cow of the entire series, multiplayer. With the latest in Activision“s venerable series, developer Treyarch has promised a better campaign by adding a moving narrative (no less penned by David Goyer) and new mission mechanics. For the first time in Call of Duty“s history, players will now make decisions that not only affect mission progression, but also affect the outcome of the plot. Making certain decisions via stand-alone Strike missions (battles that the player can direct or fight in at will) or key events in the story will determine what ending gamers see. It“s an interesting concept that is rarely explored in the largely-linear FPS genre. 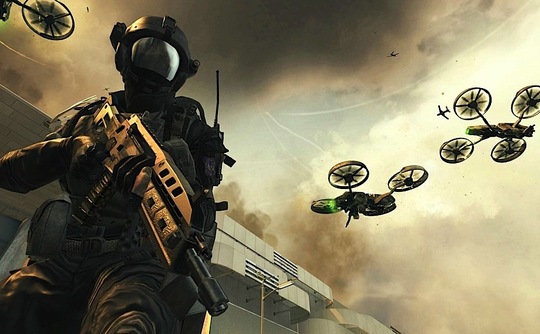 Black Ops 2 is also set 13 years into the future, meaning future weapons and combat drones are the name of the game. Unlike Medal of Honor, Black Ops II is much more focused on the (potential) future conflict over rare earth elements. When evil-doer Raul Menendez takes control of the world“s combat drone tech, he uses it spark World War III between China and America. This is a massive conflict, engulfing entire continents in a global war for supremacy.

When it comes to multiplayer, Call of Duty also has a fundamentally different philosophy, and that is the philosophy of the lone wolf war hero. Seldom is team-work emphasized in multiplayer matches. It“s all about individual players hoofing it across maps to slaughter any targets standing in their way. Sure, there are killstreak awards that are available, but these are usually players for players who get the most kills. Call of Duty isn“t the kind of game that really caters to a strong team-based dynamic, and that“s perfectly fine. I enjoy that option just as much as I enjoy team-centric games like Battlefield.

Medal of Honor: Warfighter, on the other hand, is an entirely different animal. This is a grounded, authentic experience that places gamers in the shoes of contemporary special forces operators. While Warfighter features drone technology, we aren“t going to see UAV bombers or aircraft on the scale of Black Ops 2. No, Warfighter is all about the current War on Terror, albeit in a fictionalized manner. Tapping real-life scenarios, EA and Danger Close want to tell the story of what it“s like to be a Tier 1 operator fighting against the global threat of terrorism. This is a game focused on small-scale battles won by the elite scalpels of the military. Whereas Black Ops 2 seeks to instill awe with grandiose spectacles, Warfighter wants to grab players with an emotional look at how war affects soldiers, families, and everyone at home. To put it simply, Warfighter is a far more intimate experience than the Hollywood spectacle of Black Ops 2.

Medal of Honor: Warfighter also takes a different approach to multiplayer. While the 2010 Medal of Honor reboot mirrored the lone wolf philosophy of Call of Duty, Warfighter wants to bring team-work to the forefront. All players are inserted into two-man fireteams. With a battle buddy, players became lethal weapons and are offered bonuses such as faster respawns, added firepower, and bonus support actions that benefit your team-mate and combat buddy. It“s an ingenious system that organically encourages players to work together to accomplish objectives. Fighting alone is a less-than-stellar idea when you consider the advantages of working as a fireteam. Again, this is a drastically different approach to multiplayer than Call of Duty, and I love and appreciate Warfighter for that difference.

When you try and take sides in the war for FPS dominance, you“ll end up losing. Call of Duty and Medal of Honor are both unique experiences in their own right, and to dismiss one or the other because the competitor is ”obviously the best“ is silly. Play and appreciate both games for their differences and unique approaches to the shooter genre. Call of Duty and Medal of Honor want to engross you in their unique worlds; you shouldn“t reject either of them just because the debate is there.