Naughty Bear: Panic in Paradise is the tale of a bear. He was previously made fun of by the other bears in his prior debut, Naughty Bear (of course), and well he got mad. He did some things. Some things his psychiatrist would probably disapprove of. This is a tale of what happened after he did those things. That same mean crowd of bears not only hate him now, but they went on a vacation and didn't invite him to join them (of course)! How cruel of those bears. Now Naughty is angry once more, and this time he has a lot of new fun ways to.......deal with his enemies. I'll admit- I haven't played the first game. I had actually been very interested in it for a while, but after seeing the very negative reviews, I lost interest. With the new game, I feared more of the same, but it seems that Behaviour Interactive has crafted a better, possibly even meatier (as a downloadable title at that), game than the previous one.

The gameplay of Panic in Paradise centers around you, Naughty Bear, traveling around a large map of one of the many locations on "Paradise Island", and well, being naughty towards other bears. This is shown through either scaring or killing the other bears in that map. There are many, MANY, different ways to kill the bears, but unfortunately the only way you can scare the bears is to do a creepy shout of sorts. I do wish there was another way to scare bears, as it is necessary if you want to get the highest score possible.

Speaking of that, there is a nice little score system in place in this game. Leaderboards and "Naughty Cups" encourage you to try and get the highest score that you can. You can gain far more score from what I like to call "psychological bear torture" instead of just stabbing every bear you see with an umbrella. You also gain a small amount of score from destroying the objects sitting around the island.

There are four objectives on each mission; kill each target bear in a specified way, and complete three optional secondary objectives. On very few missions in the game was I able to complete all four of these objectives, so luckily you only need to do the first one (which isn't TOO hard as is). There are 36 missions in the game through 11 different locations, so the game isn't low on content at all. You also may want to go back through some missions like I did to try and improve your score, which adds a bit of fun and replayability to the game.

One other fantastic aspect of this game that really adds to the replayability and fun is the unique item customization and leveling system. By stealing the costumes of bears, you can then purchase them in the store for coins, which you get for doing pretty much anything in this game. To be able to purchase weapons, you have to find them in the missions and gain an "ultra-kill" (a kill while a bear is distracted) with it.

Each piece of clothing and each weapon gives you different stats that can affect your playstyle in different ways. For example, if you wear gladiator armor, you can't sprint at all but you will be so heavily armored it will take the enemy bears a long time to get your health down halfway, let alone even kill you. By wearing new clothing and a weapon, you can level each one up individually until it is maxed out. This gives XP towards your total XP level for Naughty Bear himself. Personally I love this system of not only customization but also the leveling mechanic. It just adds a whole lot of originality to a game genre that could be very dull.

The first Naughty Bear game didn't have incredibly impressive graphics, and neither does this game, but at least it does improve upon the original's. Good lighting and semi-detailed environments make the game look very nice on the eyes. However, one major gripe I had with the graphics was that the dark levels were VERY dark. There is lighting on every level of course, but some levels had dark corners of the map (on levels that take place at night this was very prevalent) where items or destroyable objects may have been, but I couldn't see much at all in those dark places so I couldn't do anything with those items or objects. It was frustrating, but thankfully it was only really bad on one location: Greasy's Garage.

Naughty Bear: Panic in Paradise is a fun game that has a few weak points but overall nothing major that breaks the game like the last one had (I heard the camera was atrocious, and in PiP it's fine). For $15, there's a lot of content and fun to be had if you can mind the somewhat repetitiveness of the game and its dark humor. It's not a game for everyone, but the newest Naughty Bear installment is a good one 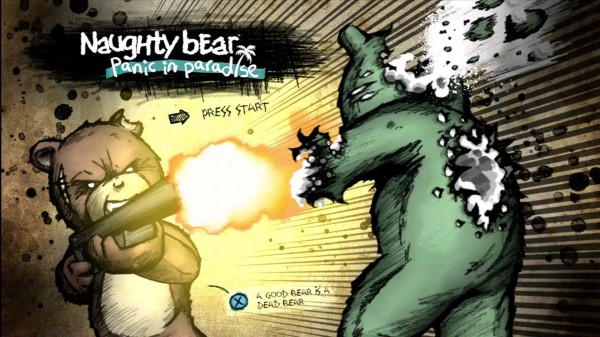 +The ability to scare or kill bears however you like- it's your choice!

+36 missions, all of which take a good amount of time to complete.

-The game can get repetitive after a while.

-Lighting makes it hard to see in some areas, one in particular.

-Only one way to scare bears while there is plenty of ways to kill them.

-No multiplayer, even though the first game had it, which is odd.

That's right! As you can see from the title, I'm giving a XBLA copy of the game away to one lucky reader! All you have to do is comment below telling me the naughtiest way you would deal with Naughty Bear himself....without getting caught by him of course!

The winner will be randomly selected on Friday, October 19. I should close the entries sometime late at night PDT, and then draw a winner shortly after.

Good luck, and have fun!