So it's been six whole months since I made the jump from the US to live in Hong Kong whilst I work on going back to school. Living somewhere new is also an interesting experience, more-so when aforementioned "somewhere" is on the other side of the planet. Despite being very westernized (It's a global city after all!) it has it's own unique quirks and culture. What have I taken away from it? What have I gained? I appreciate all questions and comments but please refrain from digging too deep into personal matters, I still value a bit of privacy

Also note, I am focusing solely on Hong Kong. I did go to Japan and the US in the past 6 months but for purposes of this post I will skip those.

Let's start with the elephant in the room, the Umbrella Revolution. No, this has nothing to do with Resident Evil but rather the deep-seated discontent Hong Kong Chinese have with Mainland China. As you may or may not know, Hong Kong was a colony of the British Empire up until 1997, when it was given back over to China.

The hand over was not, however, immediate as stipulations were put in place to gradually return Hong Kong to China using the "one country two systems" principal which allows Hong Kong to enjoyed democratic freedom and abide under a different governing system than the rest of mainland China whilst still being part of China, a fact that has grown ever more apparent in the recent months as changes have been put into motion for the next election cycle. Being democratic, Hong Kongers have the right to vote for their leaders, however with the next election China has mandated that only "pre-approved" candidates would be allowed to run, something that quite simply did not go over very well with Hong Kong.

This one of the main roads through central Hong Kong.... FILLED with people

Thus the Umbrella Revolution became a thing. Thousands thronged the streets, marching and protesting daily. Entire sections of the city went under siege as huge crowds blockaded streets and set up barriers. The most affected areas were Admiralty, heart of Hong Kong's business district and home to Government offices as well as some of the largest companies in the world, Causeway Bay, one of the biggest shopping districts on the planet that currently commandeers the highest rent prices in the world at $2,600 USD per square foot of retail space compared to that of New York's Times Square at $2,500 USD per sq foot. Finally, Mong Kok, located on the Kowloon side of Hong Kong (for those unfamiliar, the heart of Hong Kong is located on an island whilst the rest of it is located on the mainland which includes Kowloon and New Territories) which was the most violent protest site for various reasons. Tsim Sha Tsui or TST for short was also briefly affected, but not really worth noting. 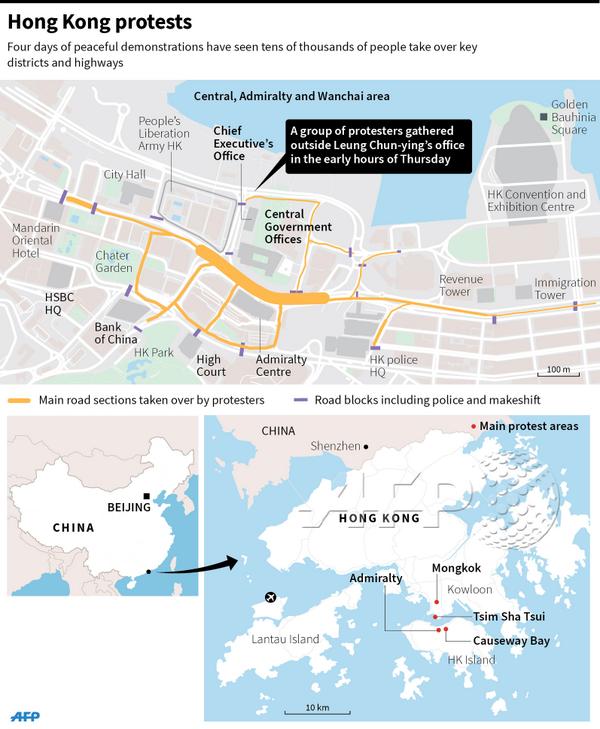 While there were frequent clashes between protesters and police, the level of violence NEVER escalated to the point of people being critically injured or killed. No shops or property were damaged, and the protesters even cleaned up after themselves more often than not. This is in stark contrast to the Ferguson protests we saw in the US this year, in which many people were injured, shops were looted and people were scared for their lives. Not ONCE have I felt any fear of harm, despite being at two of the main sites during the protests. This is the highest level of violence that was seem during the protests, which happened only one day despite the protests lasting MONTHS.

The most surprising thing about all this to me was however, how divided the citizens of Hong Kong were about the whole matter. Generally the protesters and it's supporters were made up of the poor and the younger generation whilst the wealthy and those in the transportation industry (ie. Taxi drivers) were part of the "anti-occupy" movement mainly due to them losing money and business because of the blockades.

However, enough was enough and the Hong Kong government finally put it's foot down mobilizing a force of 5,000 police officers to forcefully clear all the sites. The leaders of the movement turned themselves in and the Umbrella's seem to be in dire straits as people desperately try to continue protesting but simply can't gather enough force to do so leading to almost 50 arrests on Christmas Eve alone.

Whatever the outcome, though I suspect China won't tolerate this kind of "rebellion" much longer, I am glad to have lived through an event like this.

Crazy political social movements aside, I've also had blast adapting to a new lifestyle. I've lived on the West Coast, I've lived on the East Coast and until recently I was living in the Mid-west but I've never really lived in a city, certainly not one of this caliber. I'm also just around the PERFECT age for living life in Hong Kong to it's fullest in my opinion as the drinking/smoking/etc age here is paltry 18 (though I've never seen anyone EVER get carded), night life is fantastic and you get a chance to meet all sorts of people! Remember my Hong Kong Halloween?

I've had a lot of "firsts" here in Hong Kong, such as clubbing, which I'm not that into but with the right people can be extremely fun! There are plenty of western people around, and I have a few western friends (England, Brazil, German etc) but the majority of my social circle currently are locals which is definitely pretty neat. It can be a bit troublesome on occasion since I can't speak Cantonese but I've been picking up words and phrases here and there and am starting to be able to pick up the gist of what people say, though ultimately it doesn't matter too much since so many people here speak English anyway (Usually with British accents since they go to International schools or study in England).

Food has been great as well! There are plenty of delicious Chinese dishes as well as hundreds upon hundreds of other cuisines available here in Hong Kong. One of my favourites is definitely Hot Pot, which I've had in the States but is even better here. For those who don't know, essentially you have a big pot of boiling water in the middle of the table and several dishes of things to cook in it or season it, a fun DIY kind of meal that's meant to be enjoyed over several hours while having a good time with company!

Of course Hong Kong isn't all just city! There is plenty of stuff to do outdoors as well, as I participated in the infamous OXFAM trailwalker, a 100KM hike that takes an average of 24 straight hours to complete. I wasn't able to complete it sadly, only managed just under 40KM in about 9 hours before nearly collapsing but it was nevertheless a great experience!

Health wise I've improved greatly as well, dropping from 180 pounds to 160, though I plan on bulking up regiment so I can't actually build muscle instead of just losing weight. GYM HERE I COME!

Out on a boat, quite relaxing!

Videogames have sadly taken a bit of a backseat of late, but I've not completely forgotten them! Game shops are plentiful and have quite a selection of games (SUCK IT GAMESTOP) at prices that can usually be negotiated.

Then of course there was Christmas! (And soon New years ;D)

Christmas time was nice, though it's not reaaaaallly celebrated like we do in the States. I had a small get together on the 25th, below is our glorious Christmas dinner

And if you wanna see my ugly face, here's a selfie collage

I may have missed some stuff, and I might add more later or do another blog post or something I'm not sure. Depends on the reaction to this one. Any questions, comments...concerns? Should I do more or what would you like to see? Anything specific or...