Welcome to the twentieth week of my PokÃ©mon feature here on Game Podunk! In case you missed the last one, check it out! Stay tuned for future entries coming every Friday morning. Also! I'm extending my Mew giveaway to give you guys more time to enter.

I know I“ve already talked about PokÃ©mon“s many spin-off games in an earlier Individual Values, but: They are numerous, and cover almost every popular genre. We've had rogue-likes, photography sims, puzzle games new and old, even a collection of mini-games featuring a few that cover the racing genre pretty well! And with PokkÃ©n Tournament, a PokÃ©mon fighting-game is finally becoming reality. In the wake of both the TEMBO THE BADASS ELEPHANT announcement and Yooka-Laylee“s recent success, I find myself asking: Why have Game Freak never created a PokÃ©mon platforming game?

I“m not sure how I“d want it to play, to be perfectly honest. There are a myriad a well-designed PokÃ©Platformer could work, and they don“t all have to have ties to Pulseman. Since I“ve been playing import-exclusive Adventure Island IV lately, I guess I“ll start with a sort of Metroid-like/Cave Story experience. A well-executed game that followed this one“s lead would have Pikachu and several other PokÃ©mon land on an island, then get captured, then task the player (as Pikachu) with saving them. Each gained PokÃ©mon would have a unique ability (think Charizard“s Flare Blitz to burst open an ice-wall, or something) that allowed it to access other areas, then save each captured PokÃ©mon in the newly opened area. It could allow for a sizable roster and many, many gameplay experiences in an open world featuring wild PokÃ©mon enemies, mini-games and more.

Scaling that concept down a little: what about a game that allowed you to select one of four types of PokÃ©mon, then complete levels Mario or Sonic style by taking one of a few routes depending on the PokÃ©mon you picked? What about a Yoshi“s Island-like experience where the levels involved collecting things, exploration without time-limits, and potential big PokÃ©mon bosses?

Would the ideal PokÃ©mon platformer be a two-dimensional game, or a 3D one? How big would you want the experience to be? Do you think something like this could be justified at a $39.99 price-tag if it featured enough characters or levels, or would it find more success as a smaller eShop title like HarmoKnight? 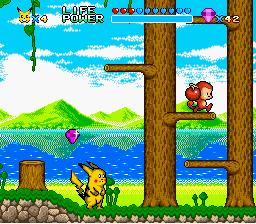 I“m just honestly surprised the only PokÃ©mon platformers that exist in the wild are bootleg ones. Nintendo has used PokÃ©mon as a means to experiment in almost every other genre (besides a horror game... although some instances in the main games themselves are kind of creepy).

What would your ideal PokÃ©mon platformer play like? Which PokÃ©mon do you feel are memorable enough to star in it? Be sure to share your thoughts below!